Born in 1985 in Lahr in the Black Forest of Germany, Adrian gathered his first experience in wildlife documentaries with Nautilus Film while travelling worldwide.

During his cinematography studies at the renowned Filmakademie Baden-Württemberg, his work for the short, DARKNESS IS A COLOR, was nominated at the most sought-after festival for cinematography: Camerimage in Poland.

After finishing film school in 2018 he worked as a cinematographer internationally in different formats like feature films, short fiction, commercials and animation projects.

In 2020 his first feature film ALBTRÄUMER premiered at the International Hofer Filmtage and was screened in several cinemas in Germany.

His short movies have won several prizes, lately with ZAWAL, as the best short film at the Saudi Film Festival 2022.

His most recent award Best Cinematography at the International Motor Film Awards 2022 was for PROJECT SANDBOX.

Being experienced in highly dynamic tools for car chases, Adrian is also working on high-concept projects with motion control robots.

However, his drive and creative expression are the tools he uses to discover a close connection to the characters and transport the story's emotions into his pictures, capturing and controlling light and movement to support the dramaturgy of a film. 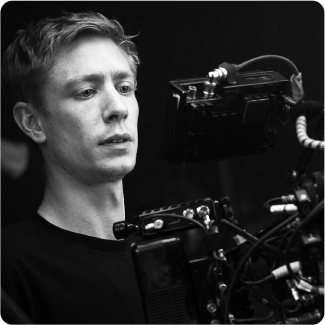