Alvaro is an emerging film director who was born and raised in Argentina. He grew up playing music and then soon after discovered his passion for film when he found an old 8mm camera in a closet in his parents´ house. His love for the two resulted in him pursuing Film Directing studies, and making music videos for Argentinian artists.

His chemistry of subtle wit, visual storytelling and a beautiful cinematic aesthetic set his work apart. He often utilizes different visual mediums and formats such as 8mm, 16mm, digital, or just a cell phone to create films that feel textured, tangible and creative. Always looking to find the perfect brush to express his art.

His work is garnering recognition across the world, “Shake Up Your Life” his short film shot entirely with an iPhone was selected in several film festivals including Switzerland, Macedonia, Sweden, Portugal, Budapest, Nigeria, USA. He also won Best Director in the BAMV Festival Buenos Aires 2019 for his music video for Duki, and Best Music Video in the NYC Independent Music Awards for his music video for Ainda. 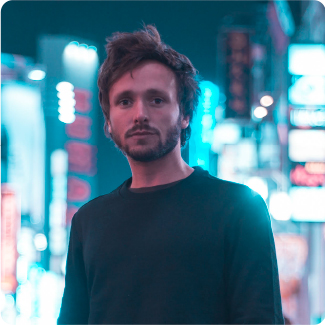 KIA - NOTHING CAN STOP YOU

PREDICTA - THE FUTURE IS HERE

SHAKE UP YOUR LIFE - Short film